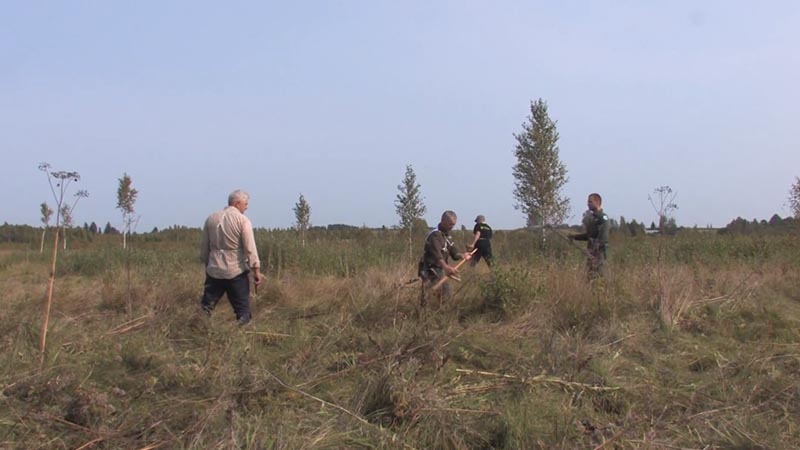 In the Biebrza National Park it became a tradition to organise scything championship at the Biebrza river.  It is unique due to both, its idea and originality: here the only eligible grass cutting tool is a traditional hand-held scythe. It has been organised since 1999 upon the initiative by the  WWF and the Biebrza National Park.  It is the XVI championship, called with pomposity and humour,  the world scything  championship for wetlands. Such competitions attract representatives from the neighbourhoods, other protected areas, teams from Belarus, Belgium, Denmark.  In 2016, a team from the Dzūkija National Park participated too. Beyond doubt, the aim of the event involves an  educational and  nature protection aspect, instead of achieving sports results. Though the winner is selected based on the quickest and cleanest area scythed down with the broadest windrow, all win in the nature protection event.  First of all, the necessity to preserve marshes is popularized, tourism and regional development are encouraged, the principles of conformity of agriculture activities and nature protection requirements are ensured. Marshy meadows were scythed in the course of ages and in such habitats natural ecosystems developed being of major importance for numerous species of plants, rare birds, insects, reptiles and other wildlife. During such festivals local ethnographical groups give their concerts, home-made production of the culinary heritage is sold, old crafts and businesses are promoted.

We would think similar events could be organised in Lithuania as there are many wetlands here, and the necessity to preserve them is urgent. And the administrations of protected areas could develop the idea for the most valuable swampy meadows.

The video footage below shows   moments of the hay making championship in the Biebrza valley, produced in the implementation of Project No. LT-PL-1R-056 “Natural Heritage – A Tool for Development of the Birdwatching Tourism In Dzūkija and Biebrza Valley““, funded by the European Regional Development Fund and project partners according to the Interreg V-A – Lithuania-Poland Cross-border Cooperation Programme.