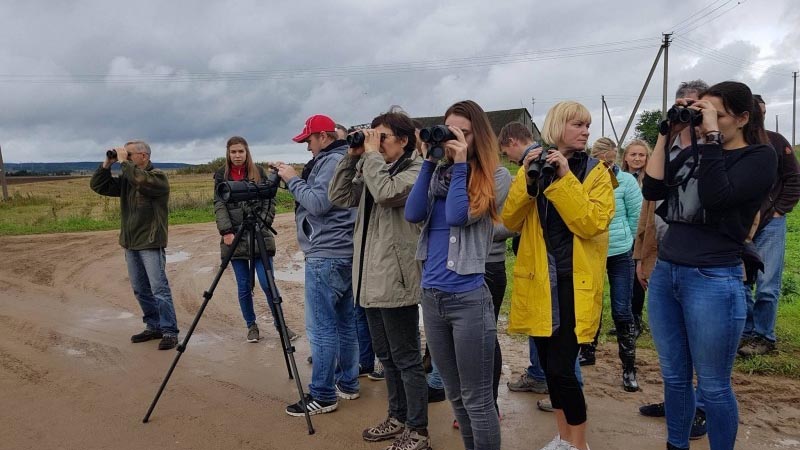 The first stop was the nature trail in the Bukta forest.  Following it, one of the most beautiful and interesting nature trails in our country, we were admiring the exclusive natural habitats: mature hornbeam, linden woods, rare in Lithuania, and swampy forests. Regimantas Vabuolas, an ecologist of the Reserve, and staff of the LOS projects described the importance of the forest from the ecological and ornithological point of view, told about species of birds, mammals and plants found here.  Further along the trail we found a hollow of the Black Woodpecker, taught the participants of the event  how to distinguish it comparing hollows of other woodpeckers, observed the Eurasian Nuthatch and described its differences compared to those found in West Europe; also we heard a late song by the Winter Wren, voices of tits, and recent footprints of a bulky elk reminded us the animal  being a lord of the forest.

On the way to the Administration of the Žuvintas Biosphere Reserve we stopped in the fields at the settlement of Ąžuoliniai. The arable fields extending next to lake Žuvintas and the mire always rejoice birdwatchers. We were not disappointed either. Having left the bus, we were able to admire six young of the Red-footed Falcon hunting on grasshoppers and sitting on electrical wires. The birds did not pay attention to us looking through monoculars, thus providing an opportunity to watch them nearly half an hour.  While birdwatching the six red-footed falcons, just several tens of meters away from the bus, five excellent looking Black Grouses flew past - they come to the fields to feed. In the distance we saw hunting Western Marsh Harriers and Common Buzzards, two Whooper Swans feeding  on the stubble-field, trumpeting Common Cranes passing by,  Tree Pipits and Common Wood Pigeons flying above our heads.

Later after lunch we came to the Administration of the Žuvintas Biosphere Reserve where Regimantas, an ecologist, briefed us on the history of the Reserve, its importance for nature protection, showed the display for visitors, and saw a film about the Žuvintas Reserve in the film hall. Afterwards, we observed the unique natural attractiveness from the observation platform built on the roof of the Administration and from the tower at the lakeside.  On the lake, we watched Eurasian Coots, Great Cormorants, Gadwalls, Northern Pintails, Mallards, Great Crested Grebes and a flock of Greylag Geese. Western Marsh Harriers flew over the reed beds, Bearded Reedlings, Eurasian Blue and  European Penduline Tits, Common Reed Buntings chirped there.

On our way home we reminded the participants of two outings this  coming Autumn for the following events: farewell for birds organised throughout Europe  in the vicinity of Vilnius on the first  October weekend and a visit to the Meteliai Regional Park at the end of October.

This trip as all others planned this Autumn are organised in the implementation of Project No. LT-PL-1R-056 “Natural Heritage – A Tool for Development of the Birdwatching Tourism In Dzūkija and Biebrza Valley““, funded by the European Regional Development Fund and project partners according to the Interreg V-A – Lithuania-Poland Cross-border Cooperation Programme.