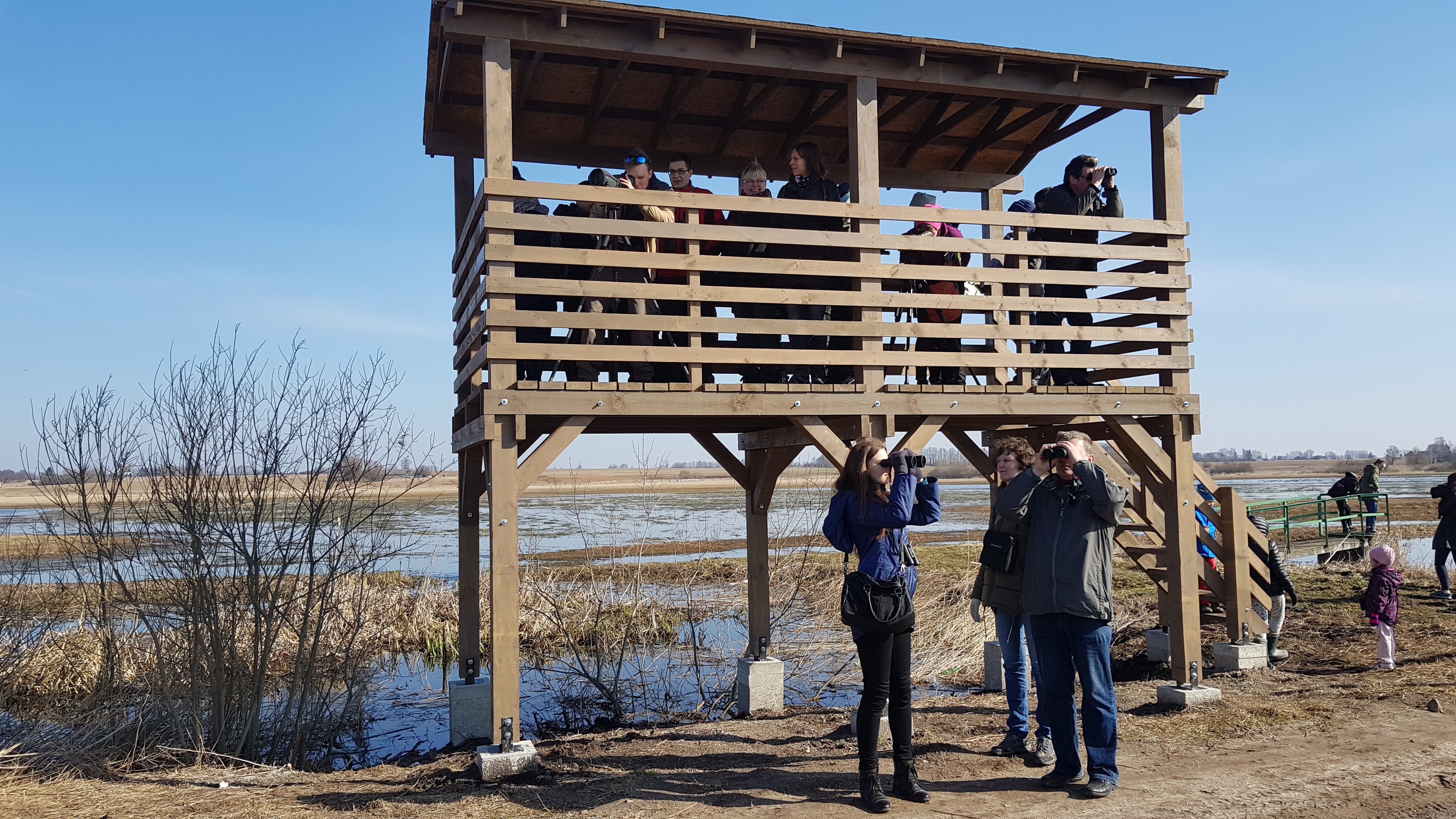 On Sunday, April 8, 2018, the LOS organised a trip to the Žuvintas Biosphere Reserve for 50 persons who managed to register first. In the morning, 7.30 a.m., we started from Vilnius by bus and at  9.30 a.m. we arrived at the polder of lake Amalvas, one of the most interesting sites in the Žuvintas Biosphere Reserve. The area is particularly important for migrating waterfowl and waders as due to the flooded meadows the polder becomes an important stopover point for flocks of many thousands of geese and ducks. In the second half of spring when water is nearly fully pumped out of the polder  the meadows become a splendid stopover site for migrating waders.

On Sunday, the weather was fantastic. The Eurasian Hoopoe was the first bird to cheer up the birdwatchers.  Before we reached the pump station of the polder a bird passed by the bus windows. Many travellers saw the Common Redshank and Common Snipe. Having listened to their sounds, accompanied by Common Reed Buntings, Meadow Pipits and Greater Short-toed Larks we proceeded towards the newly built tower (4 birdwatching towers have been built within the Project implementation  framework) to watch ducks feeding in the polder.  From the birdwatching tower we were able to clearly see Northern Shovelers, Northern Pintails, Eurasian Teals, Common Goldeneyes and Eurasian Wigeons.

Having visited the Amalvas polder,  we went to lake Žuvintas and the Administration of the Reserve. At  lake Žuvintas we were met by Arūnas Pranaitis,  the Director of the Reserve who  comprehensively told us the history of Žuvintas, its importance and challenges. Later the Director  showed us the wildlife display in the Administration premises.  Afterwards we watched the film about  Žuvintas in an equipped room.  Having learned about values of the  Žuvintas Biosphere Reserve we decided to test our knowledge observing  the lake through monoculars from the observation tower at the Administration and the birdwatching shelter in the reeds. Here, success accompanied us – we saw abundant  flocks of migrating waterfowl and birds visiting lake Žuvintas not very often. In the reed beds the birdwatchers heard Bearded Reedlings, Savi's Warblers, a male Western Marsh Harrier flew over the lake, several White-tailed Eagles were sitting on a  trunk of a dry tree.  Several thousand of ducks swam on the lake, we counted about 70 Barnacle Geese. On the island, at least two pairs of Garganeys were among the ducks, on the shore Cormorants were drying their wings stretched out.

The tour was organised in the implementation of Project No. LT-PL-1R-056 “Natural Heritage – A Tool for Development of the Birdwatching Tourism In Dzūkija and Biebrza Valley““, funded by the European Regional Development Fund and project partners according to the Interreg V-A – Lithuania-Poland Cross-border Cooperation Programme.